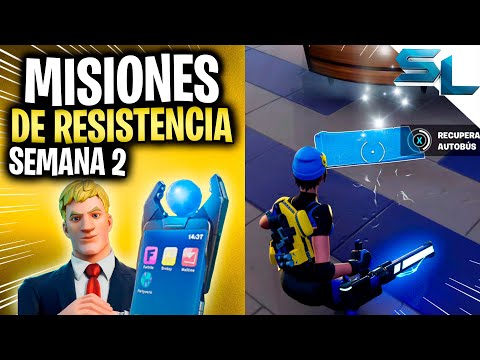 It’s time to start looking towards the Fortnite Season 2, Week 2 Seasonal quests that are set to be live in-game today.

This early on in a new Fortnite season, XP is key to levelling up the Battle Pass and staying ahead of the competition!

The Fortnite Season 2, Week 2 Seasonal quests will go live in-game on Thursday, 31 March @ 14:00 BST / 09:00 EST / 06:00 PST according to the timer shown in the quest menu. The Resistance questline is also still ongoing for one more a few more weeks if you still need to complete those quests too!

In the quest menu, we can see that the Week 1 quests won’t disappear at this time and you can still complete them between now and the end of the season.

The following is a breakdown of each of the Fortnite Week 2 quests and advice on how to complete them. Where additional information is needed, we’ll specify and update once the quests are live in-game. All quests will be worth 20,000 XP.

Tanks are relatively easy to find with them appearing at most IO bases around the map. The best locations to drop and find then would be Coney Crossroads, Tilted Towers, Rocky Reels or the Command Cavern.

Damage opponents with an Exotic weapon 0/150

Exotic weapons (light blue) CAN NOT be found just lying around on the map unless you eliminate a player who drops 1.

They must be purchased from Fortnite NPCs. You will need around 400 gold bars to purchase one so make it count because they’re not cheap!

This is a simple traversal quest that just asks you to visit the named locations at your own leisure. You can do all three in one game or just land at each spot across three games. La decisión es tuya.

The new sprinting mechanic comes into play here as you must deal damage within 5 seconds of sprinting with a shotgun.

It’s best to use either the auto shotgun or drum shotgun as they have the best rate of fire to really deal out the damage quickly.

Vending machines can offer up weapons for sale and you’ll need to purchase one of rare (blue) rarity or higher (purple, gold) to complete this quest.

They’re typically not too expensive but make sure you have at least 100 bars in your inventory just to be safe.

Remote Explosives are a rare item drop so finding one will be the challenging part of this Fortnite quest. Once you do find some, you need to destroy 25 structures. Fortnite determines a structure as any built wall/floor/roof etc.

So just destroy 25 built items (player built or pre-existing) to complete the quest.

Collect a weapon while sliding 0/1

We end with another nice simple quest. Just use the slide mechanic that arrived in Fortnite Chapter 3 to slide up to and collect a weapon by interacting with it. This quest will only complete if you’re still in the slide animation when you interact with the weapon.